Editor’s Note:  The article below was written during the dark days following the World Trade Center tragedy. It is reprinted now, March of 2012,  on the occasion of Woody Guthrie’s 100th birthday.–-Hardly Waite.

When I was young,
They packed me off to school
And taught me how not to play the game.

Back in the dark, dark days of World War II when I started to first grade in Okemah, Oklahoma, the town where Woody Guthrie had started to school two and a half decades before me,  I had to make a hard decision on the first day.  On the playground I was told that at Lincoln School  you had to be in A.J.’s gang or in Munro’s gang.  There was no in between.  You were with A. J. or you were with Munro.

The gangs rode imaginary horses,  chased each other around the red brick school building,  and shot at each other from ambush with imaginary guns.  Those were the old, uncomplicated days when a kid could point a finger at another kid and say bang without being turned over to a policeman or a psychiatrist.

I did not know how A. J. got to be leader of the gang, because he was a pretty ordinary kid. But I was proud to be in his gang.

In the ensuing weeks, I caught only an occasional glimpse of Munro.  I was not even sure that the person I saw was Munro.  But I was sure that Munro was dirty and had long,  greasy hair and crooked teeth.   He needed a haircut.  We guys in A.J.’s gang were in the majority.  The big majority.  We had haircuts from the barber shop and good clothes. Our moms made us comb our hair.  Probably Munro did not have a mom, or she did not love him or make him comb his hair. I did not want anyone ever to think that I was in Munro’s gang.

By the time I graduated  from 4th grade at Lincoln School, I was no longer so intent on belonging to A. J.’s gang.  In fact, A. J. and Munro were  gone and a new generation of leaders had replaced them.  The Munros by that time did not look so dark and scary, nor did the A.J.s look so gallant.  As I got older, it got harder and harder to tell the A.J.s from the Munros.

I never saw Woody Guthrie.  He had left Okemah and was in California  writing and singing about the Depression before I was born. Woody Guthrie was hated in Okemah, my hometown and his.

My favorite song in my early years was “The Oklahoma Hills Where I Was Born.”  The man who wrote this passionate love song about a state that never treated him very well, Woody Guthrie, the great balladeer of the Depression,  was openly scorned and ridiculed.  I heard ugly, smutty stories about his family. The man who wrote

This land is your land, this land is my land,
From California to the New York Island,
From the redwood forest to the gulfstream waters,
This land was made for you and me

was accused by his country of being a Communist and so was hated in his hometown. In Okemah, the Communists were as feared and as hated as the Jews and the Catholics. Woody had been cast into Munro’s gang, and I caught on that I no longer could stomach being part of A.J.’s.

Now that I am older and the line between the good guys and the bad is blurred,  I am again being told that I have to be in one gang or the other.  In the same words and with the same bravado that were used by the schoolground bullies in 1945,  the President is telling us: You are with us or you are against us.  We are good, they are evil.  If you’re not with us, you are against us.

The problem is, no one seems to know who “we” are or or who “they” are.  We are told that we are at war against “the terrorists.”  Who are the terrorists that I am told that I hate? Are they dark men with crooked teeth whose mothers do not love them?  Am I being told to hate  the Irish terrorists or just the dark-skinned terrorists?   Are we going to hunt down Henry Kissinger?  The Chileans are anxious to “bring him to justice”  for his many and considerable acts of terrorism against their country.  Will we hunt down the killers of the 600,000 Iraqi children under five who have been taken from mothers who loved them by U.S. bombs and sanctions?  If so, will we start chronologically with the President’s father, or work backward from  Madeline Albright and Colin Powell?   Madeline Albright said that killing a half million Iraqi children was “worth it.”   Can anything possibly be “worth” killing half a million children?  Half a million is 150 times the number of people who died on Sept. 11, 2001. Imagine the anguish of the mothers of Iraq.

Now, in October, 2001, people are putting American flags on their homes and their vehicles to tell the world that they belong to A.J.’s gang. I do not have an American flag on my home or my truck. It is not because I do not love America but because I do not want my flag to be mistaken for a vote for vengeance on an ill-defined enemy.

Once, after an act of great violence had killed innocent people,  Dr. Martin Luther King, Jr. heard the outcry for vengeance and retaliation. He said in a speech: “To retaliate with hate and bitterness would do nothing but intensify the hate in the world. Along the way of life, someone must have sense enough and morality enough to cut off the chain of hate.”

Dr. King was a great Christian. Our President does not seem like a Christian to me. He seems more like the bully, bragging in the schoolyard.  “You are with us or against us. We are good, they are bad. We will win. They cannot hide from us.”

The fate of our country may well be decided by how many of us “have sense enough and morality enough to cut off the chain of hate” and  stand in the middle ground of reason.

This land does not belong only to the members of A. J.’s gang. 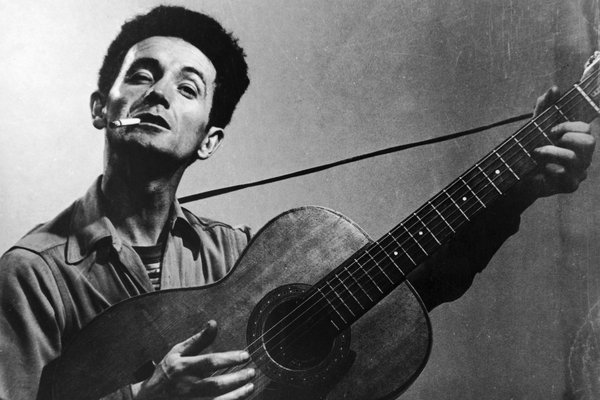 This is Woody. Not Me.