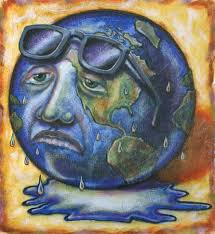 Washington (AFP) – The Earth set a series of dire records in 2016, including hottest year in modern times, highest sea level and most heat-trapping gases ever emitted, a global climate report said Thursday.

A range of key climate and weather indicators show the planet is growing increasingly warm, a trend that shows no signs of slowing down, said the annual State of the Climate Report.

“Last year’s record heat resulted from the combined influence of long-term global warming and a strong El Nino early in the year,” said the report.

“The major indicators of climate change continued to reflect trends consistent with a warming planet,” it added, noting that several markers — such as land and ocean temperatures, sea level and greenhouse gas concentrations in the atmosphere — broke records set just one year earlier.

The ominous news comes two months after President Donald Trump announced the United States would withdraw from the 2015 Paris accord on global warming, a decision that sparked widespread international criticism.

In the past billionaire Trump has called climate change “a hoax” invented by the Chinese, dismissing scientific evidence of human contributions to rising temperatures.

But as humanity continues to rely on fossil fuels for energy unprecedented levels of greenhouse gases are polluting the atmosphere, acting like a blanket to capture heat around the Earth, the report emphasized.

All the major greenhouse gases that drive warming, including carbon dioxide (CO2), methane and nitrous oxide, rose to new heights, it said.

Atmospheric CO2 concentration reached 402.9 parts per million (ppm), surpassing 400 ppm for the first time in the modern record and in ice core records dating back as far as 800,000 years.

“Climate change is one of the most pressing issues facing humanity and life on Earth,” said the peer-reviewed publication, put together by nearly 500 scientists around the globe and released each year by the National Oceanic and Atmospheric Administration and the American Meteorological Society.