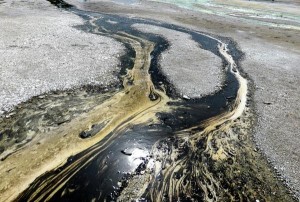 The Canada to Texas Keystone Pipeline spilled oil in Amherst, S.D., on  Nov. 16, raising questions of groundwater protection. TransCanada Corp., the pipeline’s owner,  has as of late November recovered 44,400 gal, the equivalent of 1,057 barrels, though an estimated 210,000 gal were released during the leak. The site of the oil spill lies only 20 miles from the Lake Traverse Reservation, the home of the Sisseton Wahpeton Oyate.

Currently, the pipeline stretches 2,147 miles from Hardisty, Alberta to the Texas coast. Since 2010, the pipeline has suffered three leaks in North and South Dakota. Before constructing the pipeline, TransCanada released a spill risk assessment that estimated the chance of a leak of more than 50 barrels to be no more than once every 11 years.